Thanks to a generous donation from one of our fellow Wilton residents, the town is now offering live-streaming of Select Board meetings.  To access the livestream, click here.  (There is also a link from the Wilton NH town website.)

On the same site, you can access recordings of prior Select Board meeting under the “Previous Events” section.  Thanks to the donor and volunteer who made this possible!

In a separate post, we covered the question: “If Budgets aren’t Going up Very Fast, Why are Property Taxes Increasing So Much?”  One of the conclusions is that the budget squeeze is bad and getting worse, and that makes this a very bad time to add a new program that will increase our costs every year into the future.

But a larger issue is that full‑day Kindergarten (compared to half‑day) has simply not been proven effective.  There are numerous studies, and the conclusions that they reach are varied.  In a recent paper on full-day Kindergarten, Dr. Jody Underwood states that

“Full-day kindergarten does not seem to offer a benefit over half-day, and in some cases might even be detrimental.”  Some studies indicate increased scores through grade 3, while others show no benefit.  Many of the studies show a leveling off of benefits by 3rd grade.

In a comparison of similar NH school districts with full-day vs. half-day kindergarten, there was little difference in subsequent test scores. (In fact schools with a half-day program actually did slightly better in 3rd grade test scores. See the data below.)

According to this data (provided by the WLC administration), schools with half-day Kindergarten performed 2 to 3 percentage points better in proficiency than schools with half-day Kindergarten.  At best, that’s a statistical tie.   Why would we invest tens of thousands of dollars per year in a statistical tie?  If we want the best value for our education spending, we should instead focus on the initiatives with the highest potential to add value for our students and their families. 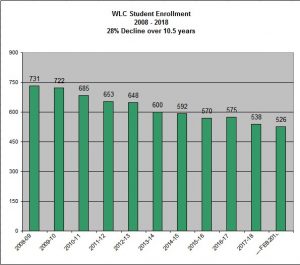 There are 3 very important events taking place in the next 10 days.  These 3 events are your opportunity to help decide how much will be spent and whether your property taxes will increase. There is a COMPLETE VOTER GUIDE for each of these 3 events.  We encourage you to download it using the links below, and print a copy to bring with you when you vote.

It’s worth noting that the State of NH also tracks a number called “Cost per Pupil”, which appears to be much lower.  But the state number excludes certain expenses, such as transportation, tuition, and debt service.  Presumably they believe that this provides an easier “apples to apples” comparison of operating expenses.  From the state’s website:

If you’re interested in reducing property taxes in your town, there are several key events that you need to be aware of (and participate in!)  These typically happen in early- to mid-March.  They are:

Stay tuned and watch this blog for more information on the key issues and candidates coming up this year.

If you’re interested in getting involved or receiving regular updates, please send us an e-mail.